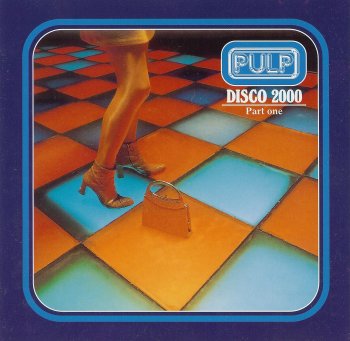 * Awards are based on wholesale rather than retail sales.

Details of the promotional video are here.
(Click on the images to enlarge) 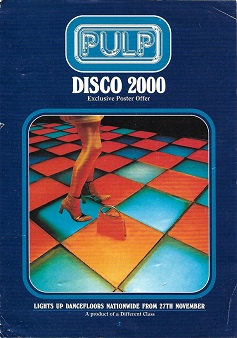 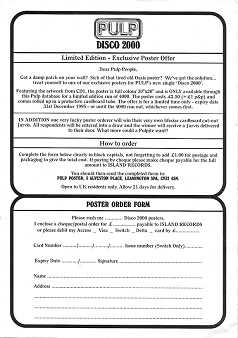 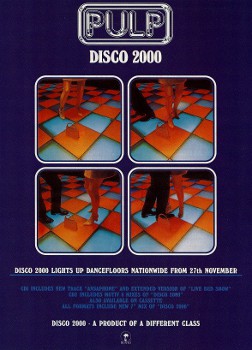 Single of the week 2

The worst tragedy for a poet is to be admired through being misunderstood," said Jean Cocteau (who would have loved Pulp, "cos they're really kitsch").

In the bright clear eyes of the smart people, Jarvis Cocker has finally killed the notion that Pulp are just a bit of a laff. For most of "Different Class", Cocker plays the avenging angel, a double agent in the class wars, a sexual terrorist whose penis is his Molotov cocktail. And that's not funny (...is it?).

But "Disco 2000", like "Pink Glove" before it, shows that what fuels his vindictive bitterness is actually a deep romanticism, like THE HUMAN LEAGUE'S "Louise" or Hot Chocolate's "It Started With A Kiss", "Disco 2000" - the second best track on "Different Class" after "F.E.E.L.I.N.G.S Called Love" - is Jarvis' fantasy of meeting an old flame and reversing time (romanticism, remember, is equal parts dreaming of what could be, and what could have been).

"Be there two o'clock, by the fountain down the road / What are you doing Sunday, baby? Would you like to come and meet me, maybe?"

As PHIL OAKEY said, its not always true that time heals all wounds...

The remixes are almost as good as the "Common People" 12-inch (I don't know who Motiv 8 are, but they deserve VCs for leaving the bloody tunes intact) but better still is "Ansaphone", the finest (although, admittedly, possibly the only) song about its chosen subject matter since Paul Evans' "Hello, This Is Joanie" in 1978.

"Are you really not at home, or are you there but not alone? / Screening calls you don't want to receive... meaning calls that come from me?" And the way he sings, "You said you'd be here by 10.30 / But you wanna stay out and be dir-tay", is priceless.

If they don't hit Number One this time, they might as well give up.

Nevermind Oasis and Blur, for some of us this has been Pulp's year. The Glasto triumph - more triumphant than Earls Court or Mile End - the Top Of The Pops shenanigans, the tabloid rage (if not Jarvis' 'apology') and some of the year's best records, simple as that. 'Disco 2000', another Jarve ode to lost love, (someone called Deborah this time) is probably not their finest moment of late but it's typical on-form Pulp with an achingly gooey chorus and sexual frustration by the lorryload. Which is good enough for most of us.

Luke's single of the month

By now, we all know it, we all love it. It's so good, even Luke likes it. "There's nothing dislikeable about Pulp," considers the doomster, struggling against the concept. "That's really weird, because I can find something dislikeable about every group." He pauses, nods along to the tune, until finally he admits defeat... "Fuck it, I like Pulp. I don't care about his obsessions. It's the stuff of children's TV or Tomorrow's World, walking around in a fuckin' bubble. That's the only thing that's bad about this record." Well, there had to be something wrong with it.