This release is a compilation of cover versions of theme songs from James Bond films. It was organised and produced by David Arnold.

All Time High is credited to Pulp, but this is questionable, because Candida Doyle and Nick Banks were not involved. The original version was sung by Rita Coolidge for Octopussy released in 1983. It was written by John Barry and Tim Rice.

The All Seeing I - Walk Like A Panther (single)

The All Seeing I - Pickled Eggs & Sherbert (album)

Jarvis wrote the lyrics (and provides vocals on track 7):

The All Seeing I were an electronic group from Sheffield comprised of Dean Honer, Jason Buckle and DJ Parrot. Jason Buckle later formed Relaxed Muscle with Jarvis.

More info: Discogs.com, Wikipedia: The All Seeing I

The All Seeing I - 1st Man In Space (single)

Written and performed by Jarvis:

Track also appears on: The Worst Of Black Box Recorder (compilation album, August 2001) and a CD given away with Select magazine (October 2000)

Listening to the track it's not obvious why Jarvis is mentioned in the title. He could have been involved in some way or he may have just been name checked.

Pussycat Trash vs. Jarvis Cocker was first released on an obscure split 7" single circa 1994. Pussycat Trash were a riot grrrl band who were active in the early-to-mid 90s.

Track also appears on: Without Some Help (compilation album, August 2006)

Jarvis wrote the lyrics and provides the vocals:

Remixed by Jarvis and Steve Mackey:

The White Sport supported Pulp at Brixton Academy in November 2001.

The Nu Forest - I Picked a Flower (single)

Written and performed by The Pastels and Jarvis:

Written and performed by The Pastels and Jarvis:

Lyrics written and sung by Jarvis:

Features This is as Good as It Gets by Relaxed Muscle

Harry Potter and the Goblet of Fire (original soundtrack)

Written and sung by Jarvis:

The Harry Potter books feature a band called The Weird Sisters. For the film, this band was made up of Jarvis Cocker (vocals), Jonny Greenwood (of Radiohead, lead guitar), Jason Buckle (of The All Seeing I and Relaxed Muscle, rhythm guitar), Steve Mackey (of Pulp, bass), Steven Claydon (of Add N to(X), keyboards and bagpipes) and Phil Selway (of Radiohead, drums). Jarvis wrote three songs for them to play. These were recorded for the film soundtrack and were also performed for the Hogwarts Yule Ball scene in the film itself. Unfortunately, only a few seconds of this performance made the final cut. However, a full version does appear as an extra on the DVD release.

Compiled by Jarvis and Steve Mackey

Lyrics written or co-written by Jarvis:

Songs for the Young at Heart (various artists compilation album)

Track also appears on: Now Hear This! compilation CD that came with the February 2007 edition of Word magazine.

Lyrics written and vocals by Jarvis:

Does not appear on all versions: only on the double LP, European special edition double CD and as a download.

The track is a cover. It is from the 1957 musical West Side Story. The music was composed by Leonard Bernstein with lyrics by Stephen Sondheim. 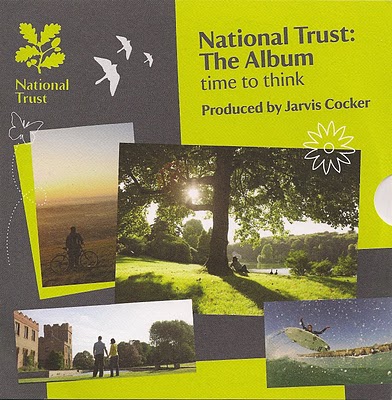 We are famed for our care of some of the nation’s most visually stunning locations; from castles and gardens to great swathes of coast and countryside, which are often promoted as havens of tranquillity. But the release of our new album is the first time that the very sounds of these special places have been given their place in the spotlight.

Jarvis Cocker, best known as the former front-man for the band Pulp, has worked with us to produce the album, entitled National Trust: The Album, comprising of British natural sounds including birdsong, crashing waves and wind breezing through a country garden.

Eleven of our special places across England, Northern Ireland and Wales feature on the album, so we hope you'll enjoy listening to the sounds of these places - to hear them for real, come along for a visit - we're closer than you think.

I hope this album is a "Holiday for the Ears". It’s not really meant to be listened to intently, like a piece of music, but more as something to have on in the background to aid relaxation or contemplation. Plus, you get to visit 13 National Trust properties in the space of 30 minutes. No mean feat. I hope it has the feel of one continuous journey and conjures up an image in the mind’s eye of the places featured. I also hope it could inspire the listeners to then visit the sites for themselves.

Get Him to the Greek (soundtrack)

Both tracks are performed by Infant Sorrow.

Discodeine with vocals by Jarvis Cocker:

Discodeine with vocals by Jarvis Cocker:

Credits: Synchronize was written and produced by Discodeine (C. Marszewski and B. Morando). Lyrics by Jarvis Cocker.